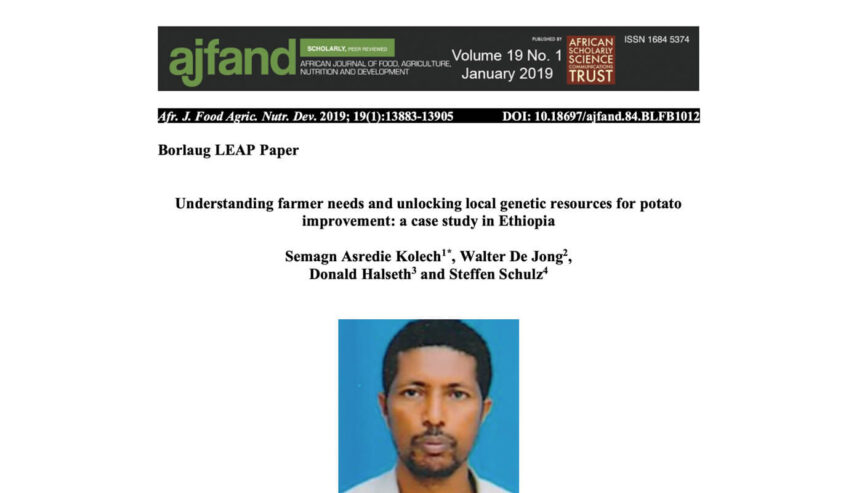 A research paper and case study looking at important potato varieties in Ethiopia.

Understanding farmers’ needs and local genetic resources are crucial steps to improve and conserve the potato crop. A study was conducted to understand what potato traits Ethiopian farmers consider most important, and to characterize the diversity and distribution of local varieties. Growers from six districts were surveyed in 2012 and 2014. Based on the survey results, participatory variety selection (PVS) activities were conducted in two districts during two production seasons. Simultaneously, local varieties were collected from northwest and southern Ethiopia and characterized using molecular and morphological markers. Farmers identified 23 traits they considered important for variety selection, with the degree of importance for each trait varying across gender groups, agro-ecological zones, and growing seasons, as well as with extent of market access. The distribution of local varieties varied by agro-ecological zone, cropping system and proximity to markets. Our genetic fingerprinting and morphological characterization further revealed that, 34% of 44 local potato varieties collected are truly unique, the rest were duplicates, known by different names. These unique Ethiopian local varieties harbour considerable genetic variation, compared to the variation found in European and North American clones. Although local varieties may have lower yield than commercial varieties, they have other desirable attributes that make them well suited for alternative uses and different agro-ecologies

We use cookies on our website to give you the most relevant experience by remembering your preferences and repeat visits. By clicking “Accept All”, you consent to the use of ALL the cookies. However, you may visit "Cookie Settings" to provide a controlled consent.
Cookie SettingsAccept All
Manage consent

This website uses cookies to improve your experience while you navigate through the website. Out of these, the cookies that are categorized as necessary are stored on your browser as they are essential for the working of basic functionalities of the website. We also use third-party cookies that help us analyze and understand how you use this website. These cookies will be stored in your browser only with your consent. You also have the option to opt-out of these cookies. But opting out of some of these cookies may affect your browsing experience.
Necessary Always Enabled
Necessary cookies are absolutely essential for the website to function properly. These cookies ensure basic functionalities and security features of the website, anonymously.
Functional
Functional cookies help to perform certain functionalities like sharing the content of the website on social media platforms, collect feedbacks, and other third-party features.
Performance
Performance cookies are used to understand and analyze the key performance indexes of the website which helps in delivering a better user experience for the visitors.
Analytics
Analytical cookies are used to understand how visitors interact with the website. These cookies help provide information on metrics the number of visitors, bounce rate, traffic source, etc.
Advertisement
Advertisement cookies are used to provide visitors with relevant ads and marketing campaigns. These cookies track visitors across websites and collect information to provide customized ads.
Others
Other uncategorized cookies are those that are being analyzed and have not been classified into a category as yet.
SAVE & ACCEPT
Powered by